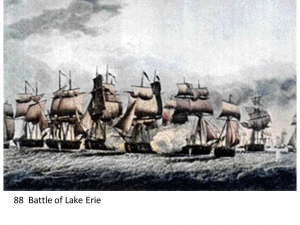 The year 1812 saw increasing American resentment toward the British: U.S. merchant ships were being boarded by the British; Indians who harassed U.S. settlers in the Northwest were seen to be given support by the British. In June of that year the U.S. Congress declared war on Great Britian. Despite the surrender of Fort Detroit and an American defeat at River Raisin, a stalemate had been reached. To both sides it was clear that the control of Lake Erie was crucial to victory, and both sides began preparation for a naval confrontation. By August 1813 the U.S. fleet , by anchoring at Put-in-Bay, opposite, had cut off the British supply line. A confrontation was imminent. Under Robert Heriot Barklay the British with 6 vessels, left the Detroit River the evening of September 9, 1813. At 6:00 a.m. Commodore Perry with a squadron of nine vessels sailed north to engage them. Buckets of water were set out to put out fires, sawdust on the decks to absorb blood and grog served with encouragement. At 11:45 the British flagship Detroit fired the first shot- cannon balls that were accurate within a half mile. Within a few hours the Lawrence, Perry’s flagship, was destroyed and the Commodore transferred to the Niagara. In this time Barclay was severely wounded, as were each of the other ships’ captains, leaving junior inexperienced officers in charge. The British began to surrender one by one…the result of a favourable wind for Commodore Perry and error on the part of the British. The victory was 27 year old Oliver Hazard Perry’s. It came at great cost. One in four men on each side became a casualty. Three officers from each side were killed and buried on land at Put-in-Bay. Over ninety sailors were wounded on each of the British and American sides. The enlisted killed were places in hammocks with 32 pound shot to weigh them down and thrown into the lake. There were over sixty such ‘burials at sea’. The brief Episcopal service was conducted for them by the chaplain, Thomas Breeze, formerly appointed by Perry: “And thus they sank without a moan….unknelled, uncoffined…and unknown”. Before the Treaty of Ghent was signed on Christmas Eve of 1814, bringing the War of 1812 to a close, reminders of the battle which took place almost 200 years ago, directly opposite our island, about 10 miles, came ashore. A short distance away, at Fish Point, bodies washed ashore and were finally re-interred on land. May they rest in peace.