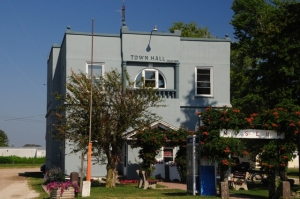 The idea of launching a museum was conceived in the autumn of 1987, when the Township Council invited suggestions for the use of recently abandoned buildings situated in the East Park Campground. The museum proposal was accepted and, through the generous support of the Township, the Heritage Centre was opened in the spring of 1988. In the following summer the institution was incorporated as an independent not for profit organization, with its own elected Board of Directors. Ron Tiessen proposed the idea of founding a museum and thereafter became its first curator.

In the second season the museum was moved to 1073 West Shore Road and occupied the first floor of the Town Hall built in 1911. In 2000 the Museum expanded its exhibits onto the second floor.

Accomplishments and Endeavours: (through the wonderful generosity of a myriad of partners)

The Heritage Centre has conducted research in the Island’s human history:

The Heritage Centre was a partner in founding the Pelee Island Bird Observatory in 2003.

The Heritage Centre, in the same year, launched Meadowlark Organic Farm, a division of the Centre.

In 2000 the Museum assisted in raising funds, through the generosity of HRDC, in restoring the historic 1833 Pelee Island Lighthouse. The Centre directed research and functioned as general contractor for the benefit of the restoration.

A number of hands-on nature projects have contributed to preserving the Island’s natural heritage, and have responded to particular needs for species at risk: for example, egg laying sites for snakes were enhanced, in partnership with the Wilds of Pelee Island. Native tree planting was begun at a number of sites, using native tree species. Native colonies of Prickly Pear Cactus were preserved. A wetland reserve and prairie habitat for wildflowers were created at Meadowlark Farm.

The Heritage Centre, as a part of its outreach program:

In 2002 Margaret Atwood and Graeme Gibson, in partnership with the Heritage Centre, initiated Springsong, A Celebration of Birds and Birding. Through this effort hundreds of visitors were brought to Pelee Island, for birdwatching, for participation in the green Bird Race for the Botham Cup, and for the outstanding writers.

In 2007-2008 the Museum is successfully established a permanent Carolinian and native tree nursery; planned and implemented an eco-bike trail network for the Island; and took the next step in teaching young people, based on our inherited local traditions since settlement, about community and symbiosis.

In 2011-2012 the Heritage Centre successfully completed 100 Gateways to Pelee. It is an out-of-doors museum researched self-guided audio tour that takes one inside the local island experience. As you travel along with our map, you will enjoy fascinating stories of island history, folklore, personalities, nature and island ways. All 97 stories have been written by Ron Tiessen from information accumulated from his last 25 years of research. Stories have been recorded on an MP3 by island voices and there is a wonderful surprise at the end! Enjoy listening to personal stories told by brothers Mac, Guy and Zane Hooper. This is not to be missed!