NATURE ON PELEE ISLAND –THE SECRET IS OUT!

A group of islanders has been working to break the secret ! With the help of a Gosling Foundation grant, ‎a program of nature events was developed.   In March we had a Salamander night walk to see the unique to Canada Small Mouth and Blue Spotted complex salamanders returning to their breeding ponds and hear about ongoing research.  The Pelee Island Bird Observatory will soon begin monitoring spring migration, visitors welcome.  Every month through to December is packed with events, see the full program here: PELEE BUZZ.

These are very trying times for sure!! The actual Springsong banquet at the Pavilion will be cancelled this year but Margaret and her team in Toronto are working feverishly to put on a virtual event so as to include our American neighbours who hold tickets and most importantly to keep this event unique and socially responsible in these challenging times.
As you know, this fundraiser is our major fundraiser of the year so I would like to take a moment to thank Margaret and her team for working so hard on our behalf to make this “virtual” gala possible.
As details are finalized, I shall be in touch……stay tuned!!
There are a limited number of tickets left online. Please scroll down to purchase your tickets.
Thank you for your support!
Kim

Springsong Weekend – Traditionally held on Mother’s Day Weekend. It is a weekend of celebration involving books and birds. This event was started seventeen years ago as a fundraiser for The Heritage Centre with the help of Pelee Island Bird Observatory and Margaret Atwood. There is a 24 hour green “bird race” competing for the coveted Botham Cup. Margaret Atwood continues the tradition of bringing award winning authors to our island where they are introduced by her at our traditionally sold out banquet.

LORNA CROZIER
was born in Swift Current, Saskatchewan. As a child growing up in a prairie community where the local heroes were hockey players and curlers, she “never once thought of being a writer.” After university, Lorna went on to teach high school English and work as a guidance counsellor. During these years, Lorna published her first poem in Grain magazine, a publication that turned her life toward writing. Her first collection Inside in the Sky was published in 1976. Since then, she has authored 16 books of poetry, including The Garden Going on Without Us, Angels of Flesh, Angels of Silence, Inventing the Hawk (winner of the 1992 Governor General’s Award), Everything Arrives at the Light, Apocrypha of Light, What the Living Won’t Let Go, Whetstone, The Blue Hour of the Day: Selected Poems, Small Mechanics, The Book of Marvels: A Compendium of Everyday Things, The Wrong Cat and What the Soul Doesn’t Want. She has also published a memoir, Small Beneath the Sky, and three children’s book, Lots of Kisses, So Many Babies, and More Than Balloons. In 2015, she collaborated with world-renowned photographer Ian McAllister on The Wild in You: Voices from the Forest and the Sea. Whether Lorna is writing about angels, aging, or Louis Armstrong’s trout sandwich, she continues to engage readers and writers across Canada and the world with her grace, wisdom and wit. She is, as Margaret Laurence wrote, “a poet to be grateful for.”

Since the beginning of her writing career, Lorna has been known for her inspired teaching and mentoring of other poets. Now a professor emeritus at the University of Victoria, she conducts poetry workshops across the country, particularly at Wintergreen and Naramata, and has taught at the Banff Centre.

Beyond making poems, Lorna has also edited two non-fiction collections – Desire in Seven Voices and Addiction: Notes from the Belly of the Beast. Together with her husband and fellow poet Patrick Lane, she edited the 1994 landmark collection Breathing Fire: Canada’s New Poets; in 2004, they co-edited Breathing Fire 2, once again introducing over thirty new writers to the Canadian literary world. She also compiled and edited Best Canadian Poets, 2010.

Her poems continue to be widely anthologized, appearing in 15 Canadian Poets and 20th Century Poetry and Poetics. Her work has been translated into several languages. A Spanish edition of her poetry, La Perspectiva del Gato was published in Mexico City. She has read around the world in every continent except Antaractica and she is the official travelling poet of the award-winning magazine Toque and Canoe. An Officer of the Order of Canada, her numerous awards include five honourary doctorates and a Governor-General’s Award for Poetry. In 2005 she gave a command performance for Queen Elizabeth II.

Her reputation as a generous and inspiring artist extends from her passion for the craft of poetry to her teaching and through to her involvement in various social and environmental causes. A frequent guest on CBC radio, she hosted a special edition on poverty on “The Current.” 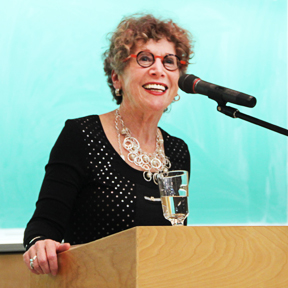 PLEASE NOTE ALL TICKETS ARE NON REFUNDABLE! THERE ARE A LIMITED NUMBER OF TICKETS LEFT DUE TO THE FACT THAT IT WILL BE A “VIRTUAL” GALA EVENT.

THANK YOU FOR YOUR SUPPORT!!

– Take part in the 24 hour “green” bird race and rally for the coveted Botham Cup. The official gong is sounded at the Heritage Centre, Friday at noon. Your team will have 24 hours to spot as many of the 311 species of birds that visit our island. Finish the day at Springsong Banquet where Margaret Atwood will give out the famous rubber chicken awards!

THANK YOU TO ALL WHO ATTENDED AND TO ALL PARTICIPATING TEAMS!!!

The 7th Annual Island Unplugged Music Festival on Pelee Island that was originally planned for Aug 14 + 15, 2020 has been cancelled.   Our festival relies heavily on ticket sales, tourism industry partners, food and beverage sponsors, as well as provincial and federal funding to come to life every year. In these uncertain times, the board unanimously agrees that it would be prudent to cancel the 2020 event at this time.

We have considered the safety of our artists, vendors, volunteers, and festival goers, the best interest of the island, and finally the financial health of our organization while coming to this decision. We hope that by making this tough decision now, we will be able to return in 2021.

As CoVid19 continues to have a profound impact on our artists, we humbly ask that you continue to support artists by buying their music. Watch our facebook page for regular artist links with some of our favourite music to purchase.

We also ask that you support our sponsors where you can. These local businesses have given year over year to support this event. Please do your part to #supportlocal.

We wish all of you peace and good health.

Love from the island…

THANK YOU TO ALL OF OUR PARTICIPATING TEAMS!!!!

Chili Cookoff – Now in the 10TH year, it is a great community gathering where teams compete for great prizes the Official Chili Cup and the People’s Choice Award. A great fundraiser for the Heritage Centre; it is drawing competitors from outside our country making the Pelee Island Southernmost Chili Cookoff a truly international event. To sign up as a contestant please contact the Heritage Centre at 519-724-2291.

Join us at the Pelee Island Wine Pavilion for a scrumptious end of the season banquet! And don’t forget – Island Pie for dessert! Tickets are limited and are non-refundable. In the event that you cannot attend, please contact the Heritage Centre and every effort will be made to re-sell your ticket. Our last Harvest Dinner was a sold out event so save the date as this will no doubt be a very memorable evening!

Harvest Dinner is part of the new Pelee Fall Flight Weekend – an event from the new PELEE BUZZ!!! 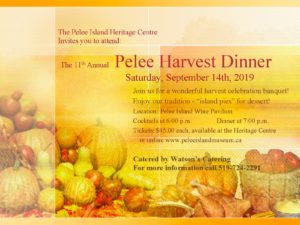